The Mysterious Giant Drawings of Nazca

There are all sorts of ancient mysterious carvings in the world, but some of the most amazing are the giant pictures carved into the rock at Nazca in Peru.

Humans have some strange ideas about them, even thinking that they might be a map for aliens, but no one knows for sure ... except our yetis in The Department of Mysteries!

Thousands of years ago, there were many yeti clans living in the mountains of Peru. They lived alongside the Nazca tribe and the yeti elders often talked with the Nazca chiefs long into the night about the stars in the sky and the stories they told. As the world wasn’t so easy to travel back then, it was difficult for the old yeti elders to share this important knowledge with their clans as they lived far apart and the mountain paths to reach them were too steep for aging yetis!

One day as the Nazca tribe were carving on the rocks they noticed that if they dug down past the surface, the rock underneath was a very different colour.

Later that evening as they shared this discovery with the yetis, it sparked an amazing plan. The elders called for the strongest yetis to come down from their mountains and they worked together to cut the legends of the stars into the ground as huge pictures. The carvings were so large that the yeti clans could see them from them many miles away and from that time forward, when the yetis looked down from their mountains, it it made it much easier to this day to share their stories and legends about the sky at night ... even to this day!

So now you know the reason for Peru's mysterious giant carvings, no aliens involved ... just the story of the stars and some clever yetis.

Have some Nazca fun!

Print and colour
these Nazca yetis
and add some giant
carvings to the rocks.

Draw your own
giant nazca pictures

Why don't you try drawing your own giant sized pictures, like the ones at Nazca, next time it's a sunny day?

Fill an old squeezy bottle with water and draw on the pavement ... great fun with no mess!

Can you spot the differences between these two pictures?

Look for all ten, then scroll down to check your answers.

Search the symbols for the letters you need then have a go at writing your name in ancient yeti.

Ask a grown-up for help if you find it tricky.
Why don't you try writing the letters in their name together too! 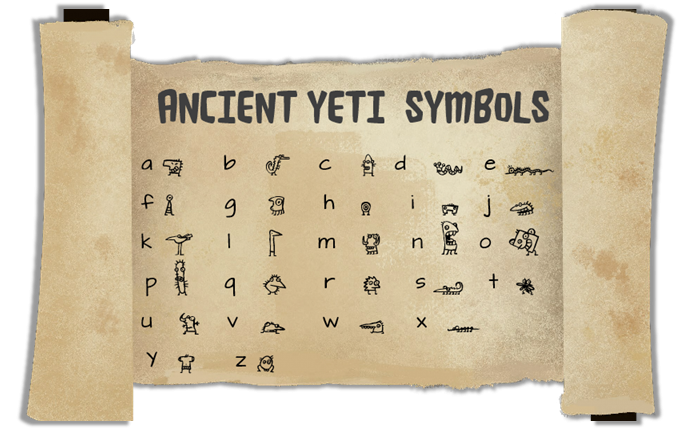