Grown-ups like to think they know lots about yetis and the different names that they’re known by. In America and Canada they’re sometimes called Sasquatch or Big Foot and in snowy parts of Asia they’re sometimes known as The Abominable Snow Man. These all sound a bit scary, but what grown-ups don’t realise is … that’s exactly what yetis want you to think!

The word ‘yeti’ actually means ‘rock-bear’, and if grown-ups realised that yetis were even a little bit cuddly they’d never be left alone.

As well as their amazing hiding skills the yetis hold a special event every year to protect their clans and make themselves seem much more dangerous to scare human-people away.

As summer ends, yetis hold 'The Big Human Hoodwink’. Each yeti clan chooses a fallen tree and works together to carve it into a giant-sized replica of a yeti paw. The bravest yetis set out to far away woodland and leave giant footprints carefully squelched into the mud, then head back to their villages where they roar happily together, ready for a special yeti-type celebration.

For most humans, this is more than enough to keep them away, coming across one of the squelched footprints would make you imagine that yetis are huge and quite scary! Unfortunately there are sometimes a few determined hunters who are extra hard to get rid of, so the yetis have an extra trick just in case.

When the bravest yetis get back to their village, everyone celebrates with a 'Hoodwink Hullabaloo’ where they light a huge bonfire ready for the the giant paw-log to take pride of place on top. The bonfire casts shadows onto the trees and the yetis take it in turns to tell stories and show the littlest members of their clan how to use their paws to make the shapes of ‘Bigfoot’ type creatures as shadows. The yetis all practise round the bonfire and sing lots of fun shadow songs together until they can all make the shapes they need.

If a yeti-hunter or an unsuspecting climber comes too close to their village, the yetis use the light of the sun or the moon to make their shadow creature appear suddenly on trees or rocks which usually makes the hunters scream and run away, or (if they’re especially brave or silly) helps the yetis lead them in the wrong direction as they try to catch up with the giant beastie!

Next time you hear stories of scientists finding giant footprints in the forest or stories of them spotting a huge ape like creature in the woods you can smile a secret smile to yourself as you know better (sssshhhh!).

Have some hoodwink fun!

Colour your own
Hoodwink Hullabaloo

Why dont you try
some yeti shadows
at home?

Find the matching footprints in the mud. 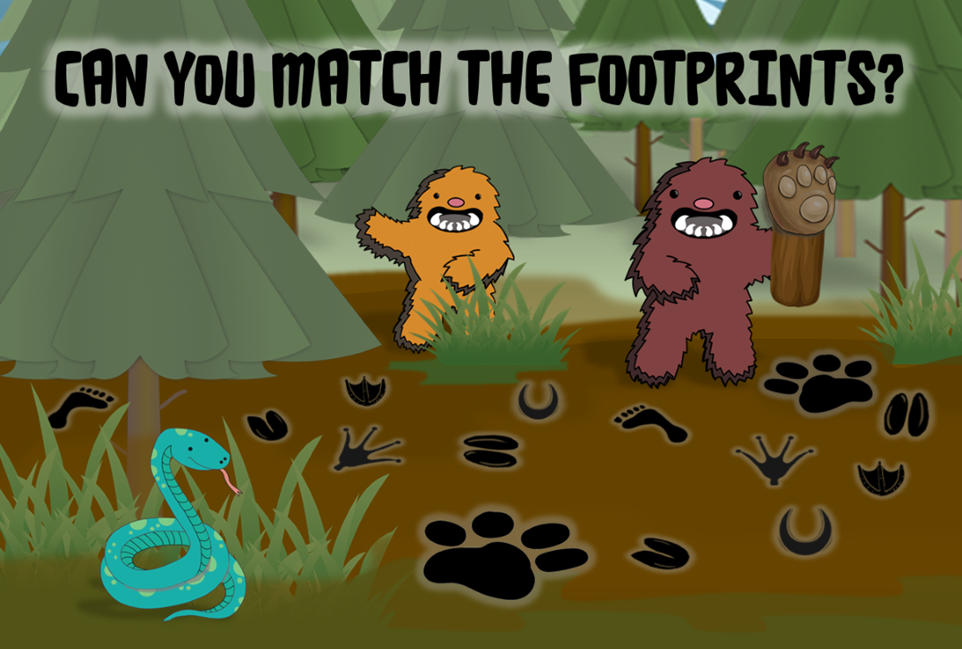 Why don't you
try something a
little more tricky?